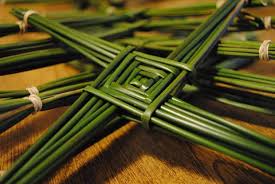 Today, according to the ancient Celtic calendar, we celebrate the first day of Spring, “Imbolc”, also known as St. Bridgid’s Day in Ireland. St. Bridgid is one of our Irish patron saints, symbolized by a cross made of rushes that are traditionally hung on doors to protect us against fire and other calamities. The cross itself may have older roots than Christianity because February 1st is also the feast day of the Celtic goddess Brigid, but who knows?  You may also recognize the cross because it’s featured in the logo used for RTE television and its considered one of our three most famous symbols for Ireland, along with the harp and the shamrock.

This week I attended an event an the Rose Rare Book Library at Emory University, sponsored by our Irish Consulate in Atlanta. To honor strong Irish women and St. Brigid, it was an evening of rich poetry reading and music, with featured poets and educators. One of my favorite tributes of the evening was by my friend and retired Irish Studies Professor at Emory,  Jim Flannery PhD, who spoke about the legacy of Lady Gregory. The tribute explained that she may not be well known simply because she was a woman, but regardless, she played a  significant role in the arts, including the founding of the Abbey Theater in Dublin.

Lady Gregory was one of the leaders of the Celtic Literary Revival movement and organised meetings at Dunguaire Castle, just outside Galway on the Wild Atlantic Way.  She brought local literacy giants together such as W. B Yeats, George Bernard Shaw and J. M. Synge to Dunguaire Castle. The castle is owned by the Shannon Heritage today who pay tribute to the ancient Celtic bard traditions of oral story telling and singing. 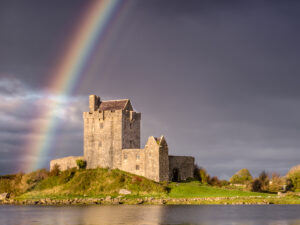 This summer we look forward to returning to Dunguaire Castle on our Wild Atlantic Way Tour where the music and stories have never faded, thanks to the contributions of Lady Gregory – a strong Irish woman worthy of celebrating.

Wishing everyone a Happy first day of Spring!